Embrace of The Serpent

Tracking two parallel odysseys through the Amazon, this historical epic from the fiercely talented Colombia filmmaker Ciro Guerra offers ethno-botanical adventure, mysticism, and a heart-rending depiction of colonialism laying waste to indigenous culture. In 1909, a canoe bearing ailing German explorer Theodor Koch-Grünberg (Jan Bijvoet) arrives at river’s edge, where the young shaman Karamakate (Nilbio Torres), ostensibly the last member of a decimated tribe, waits warily. Theodor is searching for an exceedingly rare flower that he believes could cure him of his fatal illness. Resentful of whites, Karamakate agrees to help only after Theodor promises to lead him to other surviving members of his tribe. Their journey takes them through rivers and jungles ravaged by European interference, climaxing at a mission where a sadistic Spanish priest lords over a huddle of young indigenous orphans. Meanwhile, in a parallel narrative set in the same region in 1940, American explorer Richard Evans Schultes (Brionne Davis) conducts his own search for the elusive flower in the company of an older Karamakate (Antonio Bolívar) in a landscape brutalized by the rubber trade.

Recalling such visionary films as Jim Jarmusch’s Dead Man and Werner Herzog’s Aguirre, the Wrath of God, EMBRACE OF THE SERPENT grips with suspense as it captures a dialogue between representatives of two worlds in devastating conflict. Gorgeously photographed in silvery black and white, this elegiac adventure story surveys a vanishing way of life and the natural world that we neglect (and abuse) at our peril. 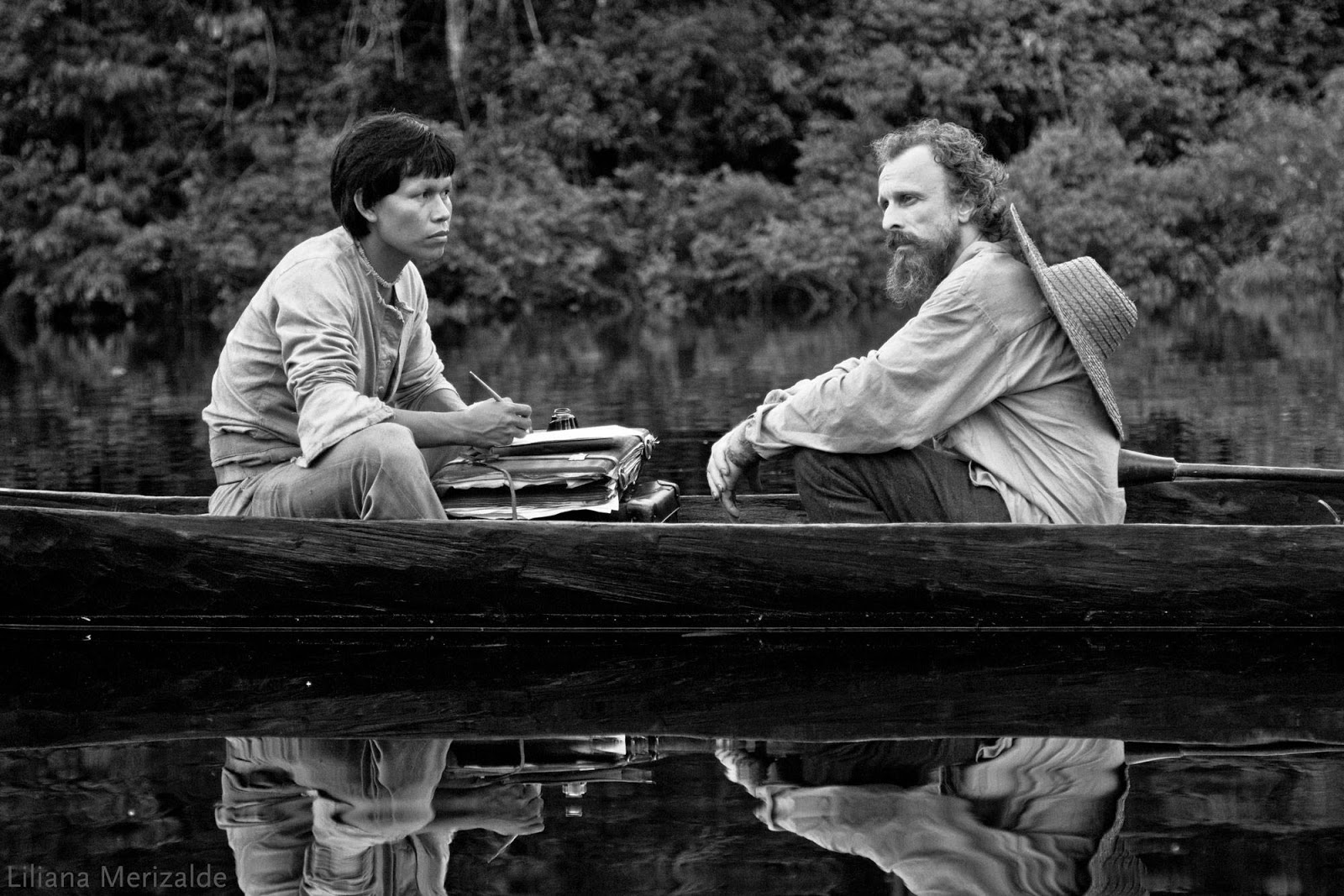 “Viewed largely through the aggrieved eyes of a shaman whose tribe is on the verge of extinction at the hands of Colombian rubber barons in the 19th and 20th centuries, Embrace of the Serpent, a fantastical mixture of myth and historical reality, shatters lingering illusions of first-world culture as more advanced than any other, except technologically.”
– NEW YORK TIMES

“It’s an absorbing, even thrilling head trip. It is a Heart-of-Darkness voyage of discovery. It is a lament for all the lost plants and peoples of the world.”
– THE PLAYLIST

“Colombian director Ciro Guerra’s Embrace of the Serpent is a legitimate stunner, a river-trip that will mesmerize and jack with you, leaving you not quite certain, at its end, how to go about the rest of your day.”
– VILLAGE VOICE

“The ravages of colonialism cast a dark pall over the stunning South American landscape in Embrace of the Serpent, the latest visual astonishment from the gifted Colombian writer-director Ciro Guerra.”
– VARIETY

“…the interweaving narratives, which comment on (and sometimes echo) each other, begin to develop a hypnotic grandeur. It’s a hell of a trip.”
– SCREEN INTERNATIONAL

“A visually mesmerizing exploration of man, nature and the destructive powers of colonialism.”
– HOLLYWOOD REPORTER