Zola (newcomer Taylour Paige), a Detroit waitress, strikes up a new friendship with a customer, Stefani (Riley Keough), who seduces her to join a weekend of dancing and partying in Florida. What at first seems like a glamorous trip full of “hoeism” rapidly transforms into a 48-hour journey involving a nameless pimp, an idiot boyfriend, some Tampa gangsters and other unexpected adventures in this wild, see-it-to-believe-it tale.

Zola meets Stefani at a restaurant where Zola waitresses, and the two immediately click over pole dancing. Only a day after they exchange numbers, Stefani invites Zola on a cross-country road trip, where the goal is to make as much money as possible dancing in Florida strip clubs. Zola agrees, and suddenly she is trapped in the craziest, most unexpected trip of her life.

Janicza Bravo directs this outrageously unique and eccentrically animated saga that was first chronicled in 144 tweets posted by A’ziah King on October 27, 2015. Written by Bravo and playwright Jeremy O. Harris, ZOLA frames the protagonist’s narrative in a groundbreaking exchange that plays with and questions perspective. Bravo’s luscious atmosphere and impeccable attention to detail is unequaled and further confirms the sophomore director as a visionary voice of American independent cinema. 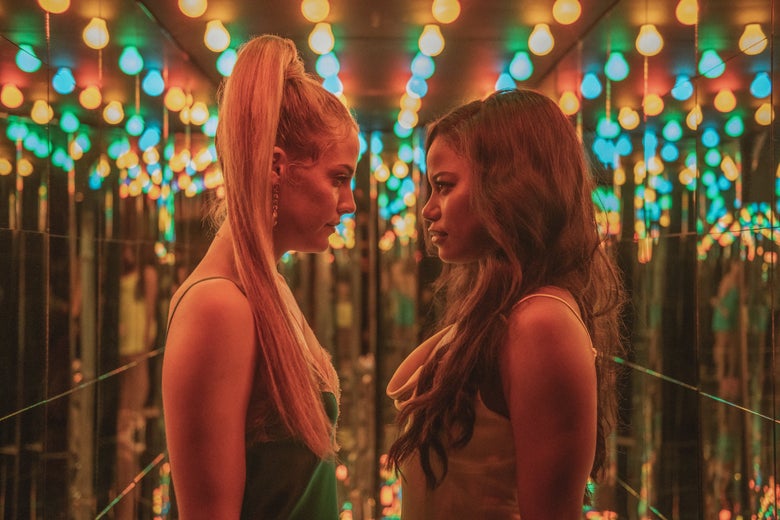 “Zola feels utterly contemporary but will no doubt be examined for decades to come, as a marker of both this particularly crazy time in history and of the moment that social media became self-aware. Whip-smart, funny, complicated, and just plain wild, Zola is 90 minutes of brilliance.”
– THEWRAP

“The movie exemplifies the power of the cinema—even the popular and commercial and invigoratingly swingy cinema—to reflect the inner life through imaginative methods that, at the same time, reveal the fractures and complexities of public life with probing and passionate insight.”
– THE NEW YORKER

“Janicza Bravo prioritizes character and personal eccentricity, in the process truly earning the screenplay’s cutting observations about how social media encapsulates culture’s ability to commercialize anything, especially ourselves.”
– SLANT